‘Greece is at an existential crossroads’: a statement that has been repeated over and over again in the international media, at European summits, and in the Vouli. On the streets and squares of Athens and throughout the country, that existential crossroads is not something remote and impersonal, something abstract and far-away. It concerns people’s own livelihoods, their personal existence, their very ability to feed their children. And when humans feel threatened so profoundly in their everyday lives, they tend not to ‘give a damn’ about the lofty (?) motivations that underlay the Euro, the supposed attractions of the European project, or the world’s interest in wider financial stability. They disavow the system. They revolt. Some do so using petrol bombs. Others do so through their voting patterns. Greece’s tortured political history suggests resistance could tend towards the former rather than the latter if Greece’s and Europe’s political leaders don’t tread very carefully. But there is yet hope for peaceful and profound change. 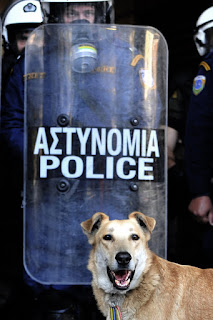 The problem goes beyond mere questions of constitutionality or economics; it emerges, above all, from Greece’s broken, post-dictatorship social contract, the very basis for its failed societal model of the past three decades. It is easy to forget in 2011 in how far the period of stability in post-dictatorship Greece has been the exception rather than the rule within the broader context of recent, twentieth-century history. Spain’s civil war – a cause célèbre throughout Europe in its day – has been written of extensively, and has in many ways overshadowed that other, perhaps equally cruel European civil conflict, in post-World War Two Greece. The resulting constitutional instability and internal turbulence reached their nadir only during the cruel-but-farcical Colonels’ Regime of 1967-1974; when Greece entered the EU in 1980 as the ‘Hellenic Republic’, the scars within its society hadn’t healed. Substantial portions of its population remained disenfranchised and excluded. The subsequent flow of European grants and subsidies provided a cure of sorts, but resulted in a social contract that was entirely distorted and ultimately untenable. In fact, it would perhaps have been better had Greece joined the European Union at a far later date.

Greek elites always saw the public sector as a tool of political patronage; Europe allowed them to expand this abuse, without moreover having to raise the domestic revenue that such an exercise in patronage would normally require. Andreas Papandreou (whose father Giorgios allegedly prophesied that he would run Greece asunder) at first hired left-wing Greeks in an understandable effort to correct their exclusion from the state in the decades following the Communists’ civil-war defeat; but things soon spiralled out of control, with successive socialist and conservative governments hiring sympathisers in turn, buying off public-sector workers with an ever-expanding list of (at times preposterous) benefits and wage rises. The private sector, meanwhile, was stifled under a mountain of rules and regulations, or smothered with productivity-reducing subsidies (Greece is 109th in the World Bank’s ease-of-doing-business index): sector after sector was turned into a ‘closed shop’, where only a few select, licensed, and usually ‘connected’ individuals were allowed to ply their trade. In return, those left outside of the relative safety of public service or monopolised private sectors were allowed to treat the payment of taxes as contributions to a charity called the ‘Hellenic Republic’. 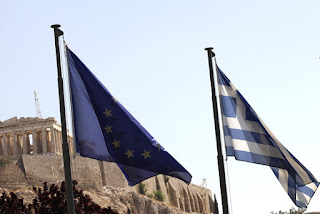 Without these generous grants and subsidies from Brussels, Greek society would have had to confront the state’s spiralling expenses and inadequate revenues far earlier, and in a far more piecemeal fashion than is the case today. And without the entirely politically motivated admission of Greece into the Euro, Greek society would have faced the higher interest payments on its debt, soon disallowing any publicly funded ‘generosity’ on the part of its irresponsible elites. Quite apart from the issue of inadequate oversight and the fiddling of numbers, it is these subsidies and grants themselves that created an imbalance in the Greek economy that allowed for the continuation of venality in all impunity. As it happened, these subsidies crammed the countless difficult decisions that could have been taken in stages, over decades without causing much social disruption into today, overwhelming the nation’s body politic and tearing its fabric apart.

Re-establishing social cohesion on a more sustainable basis won’t be easy. The kind of economic shock Greece is going through more often than not results in a shifting of the political landscape, but this doesn’t seem to have dawned on many of the existing political actors. The established political centre is, in essence, morally and politically bankrupt; both Pasok and the ND have lost a large chunk of their electorates, even as they continue business as usual by playing petty partisan politics on Greece’s economic half-corpse. Predictably, both the populist right and unreformed radical left are screaming their lungs out hysterically in an attempt to pilfer votes from their mainstream counterparts, in a way that insults the Greek electorate’s intelligence. Greece’s trade unions are fully living up to their reputation as the unduly romanticised representatives of vested public-sector interests. And ordinary Greeks are looking on in growing disgust, confusion, fear and anger.

This existential crossroads could take the country in either of two directions: political-economic oblivion, or renaissance. The basic choice is there for Greeks to make. While still relatively disorganised and ideologically incoherent, the ‘indignados’ movement could form the basis of the latter by spawning political movements that could challenge existing elites and claim a place in the country’s parliamentary politics. And Greek politics needs new blood, badly; given Greece’s still-vibrant and articulate civil society, and the utter rot of its political elites, such new blood should not be too difficult to come by. The end result could be a ‘fourth republic’, with a renegotiated constitutional bargain, and a competitive economy where social progress is based on substantial private-sector growth rather than the pilfering of state institutions and overdependence on EU aid. Insofar as one cannot rebuild state and society with a millstone around one’s neck, default – preferably managed and gradual - should also be an option, an option a far-from-blameless Europe would have to accept and support. Failure to rebuild would mean the Molotov cocktail and the brash populism of the extreme right and the left gaining the upper hand; taking that millstone off the Greeks’ necks would thus be a wise investment, far wiser in any case than the maladministered subsidies and grants that distorted the country’s economy in the first place.