Back to the Future, Again?

Is this how it feels before global calamity? The problem with historically transformative disasters – the two World Wars, the collapse of the Soviet Union – is that they are usually accompanied by a confluence of circumstance and agency that causes the situation to spiral beyond the control of political actors. Witness the dramatic acceleration of the Soviet Union’s hitherto gradual decline following the August 1991 coup. Or, in a more conventional vein, the deadly forces unleashed like a coiled spring by a few shots in Sarajevo, in August 1914.

Economic crises and financial crashes provide even more appropriate examples of what complexity theorists call this the ‘butterfly effect’: a minor event (‘the flaps of a butterfly’s wing’s in China’) is amplified through an unstable system out of all proportion (in the conventional narrative, into a hurricane). Joe Shmoe fails to pay the sub-prime mortgage on his woefully overvalued home in Duluth, Ohio, and Italy goes bust, with or without a few human blunders in between.

Today, we, in the supposedly victorious post-Cold War West, may be finding ourselves in a similar situation, where an unstable set-up could combine with political ineptitude to produce the most unintended results. The world (or, to be more exact, the Western) economy has been considerably weakened by the ongoing financial crisis, whose underlying systemic tensions and imbalances are still present in unmitigated form. The banks may have been saved, but only by transforming private into public debt, pulling down the weakest sovereigns in the process. Global trade still places China as the export manufacturing powerhouse it was before the crisis; efforts at encouraging domestic consumption there have been piecemeal, and the yuan is still undervalued. The financial system remains, for all intents and purposes, unreformed: it has been tweaked at the edges, but over the longer term, its capacity to produce systemic crises has neither been eliminated nor in fact mitigated. The Euro’s possible death-throes are an ominous sign that these imbalances are creating a tipping point, at the other end of which lies financial, economic and political chaos. 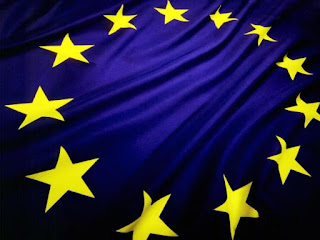 Any miscalculation would be disastrous at this point. At stake is not just a common currency, or a particular economic model. At stake is the very structure of security on the European continent, in Western Europe since World War Two, in the centre and the east since the fall of the Berlin Wall.

But what the myopic Eurosceptics in the conservative party and on the pages of the Daily Mail, The Daily Telegraph and the Spectator either do not realise (or do not want to realise), is that is isn’t simply Italian and Greek pensions, the Franco-German axis, European democracy or that is at stake with the failure of the common currency; it is the very idea, the very mode of thought that has made Western Europe the most peaceful region in the history of mankind over the past 60 years.

De-securitisation and a-security are central to this mode of thought: the idea that there are no longer security issues between European nations, and that threats are defined and tackled collectively, be they of a military, political, economic, societal or environmental nature. This is precisely what dampened the modern European curse of nationalism following World War Two, and it has become taken for granted to such a degree that we might actually end up inadvertently losing the very stability it has provided over the past decades. This has happened before: the crowds that cheered their armies into the meat-grinder that World War One was to become were blinded by the progress, prosperity and European hegemony of the years that came before. Those – like David Cameron - who see the possible fall of the Euro as an ‘opportunity’ are in no way less small-minded.

In fact, a plethora of anti-European market fundamentalists – among others Daniel Hannan, Norman Tebbitt and Janet Daley, and the larger part of the parliamentary Conservative Party – have made a point of populating the pages of the British press with a curious and incoherent mix of the euro-sceptic and germanophobic. As usual, they accuse Europe of a lack of democracy, nay, even of organising coups; the solution, they say, is not the democratisation of Europe’s institutions but a return of powers to Westminster. Staunch parliamentarians that they are, they suddenly discover the wonders of the not-so-parliamentary referendum. And, with a mindset stuck somewhere in 1945, they accuse Germany of trying to take over Europe, the implication being that the United Kingdom would have to play its traditional role of ‘balancer’, as in the good old 19th century. For good measure, they also advise the PM not to trust ‘them frogs’, no doubt remembering the past glories of Trafalgar and Lord Nelson. Some people apparently don’t mind taking the term ‘conservative’ to its absurd, retrograde extremes.

Purposefully or not, all this finger-pointing serves to camouflage the one elephant in the room: the dismal failure of the Anglo-Saxon model of unfettered, minimally regulated capitalism in fulfilling the very promise of prosperity it has been dangling in front of the overwhelming majority of society for decades, but could only deliver at the cost of massive indebtedness. Contrast this with the success of the much more tightly regulated and consensual German economy – where employers, trade unions and the state co-ordinate instead of engaging in never-ending class warfare – and the inherent power relations that drive such narrow fake patriotic rhetoric become clear.

This is not about defending democracy; after all, none of these instant radical democrats are clamouring for referenda on that insultingly archaic and undemocratic institution much closer to home, the Corporation of London, or the austerity measures and cutbacks that have affected millions right here, in Britain. This is about transferring powers back to nation states, whose individual regulatory power will pale into insignificance when confronted with the might of transnational corporations and financial entities whose market capitalisations and turnovers can rival an individual country’s GDP. This is about diverting attention from local socio-economic failures through a primitive appeal to parochial nationalism. This is about divide, rule, and obfuscate, and certainly not people power.

The implication of this euro- and Germany-bashing is that Greece and Italy would have had a choice in the absence of intervention from Brussels to retain the ridiculously inept governments of Berlusconi and Papandreou. But the argument is flawed on two levels that go beyond the simple observation that both changes in government were approved and legitimised by elected parliaments. Firstly, ‘Europe’ was merely acting as an intermediary, transmitting the demands of the market to these nation-states; if anything, it is the market – sacrosanct to the Eurosceptics mentioned above - that is fundamentally undemocratic, and shifting power to nation-states wouldn't change that one jot. Quite on the contrary, on their own, outside an economic and political union, nation-states would be at the mercy of these markets to a far greater extent. Could the UK, Greece or Luxemburg take on wannabe (?) monopolists like Microsoft, extortive multinationals like Europe’s mobile telecoms operators, and professional gamblers in the financial sector on their own? Hardly. ‘Desist, or we’ll take our jobs elsewhere’ and ‘Regulate, and we’ll take our money elsewhere’ would become even more frequently heard refrains than they are today. Try to organise referenda against that.

Secondly, even if the flawed mechanisms behind the Euro are to blame for the imbalances affecting Southern Europe, the solution to these flaws is more, not less of a more democratised Europe; and this choice for Europe, democracy and the Euro goes beyond the simple logic of economic expediency. Shrinking the European project, or risking the latter through a collapse of the Euro would be the height of irresponsibility, precisely because of the ‘butterfly effect’ and its associated dangers described before. Abandon Europe, and all bets are off, security-wise. For the first time since World War Two, 'Europe' will not have tackled a major security challenge collectively. Once this logic of nationalist competition takes hold, once relationships are re-securitised, there is no knowing where it will end, as it spills over from the economic into other security sectors and affects issue-area after issue-area. What might be inconceivable today could become reality tomorrow: Mearsheimer’s back-to-the-future thesis might perform one of the most dramatic turnarounds in the history of social science.