After the Final Whistle

Much has been said and written about Russia's next steps in the geopolitical drama that is unfolding in its 'near abroad'. Let's look at three of the states that are mentioned most often as targets for destabilisation: Georgia (what remains of it), Azerbaijan and the Ukraine.

The current situation in Georgia gives Moscow plenty of opportunities to keep meddling in the country's internal affairs. Firstly, its “peacekeepers” are stationed in the immediate vicinity of the Tbilisi-Gori-Poti highway and railroad - the Southern Caucasus’ economic jugular vein. The Kremlin could invent any number of pretexts to cut off traffic on this route that is so crucial to the economic survival of not only Georgia, but all three Caucasian states. Armenia receives much of its strategic supplies (oil, wheat) through this all-important transportation corridor, and recent events have shown Russia to be quite indifferent to its ally’s fate when it comes to dealing with Tbilisi. Baku’s oil industry is also dependent on this route for technical supplies, and considering Azerbaijan’s thinly disguised pro-Western leanings, Russia would be even less reluctant to remind the wannabe ‘regional leader’ of its dependence on its goodwill. With such an important portion of the country’s transportation infrastructure at Moscow’s mercy, it could also become much more difficult for Tbilisi to attract the FDI it so urgently needs for rebuilding.

Secondly, rump Georgia contains two significant, geographically compact non-Georgian ethnic populations: the Azeris in the Marneuli district and the Armenians in Javakheti. While there have been tensions in the past, especially in Javakheti, these have so far been successfully addressed by the Saakashvili administration, sometimes in co-operation with Armenia and Azerbaijan – both of whom are not at all interested in allowing their ethnic kin to poison their respective relations with Tbilisi. Both populations have shown themselves loyal to the Georgian state during the recent crisis. There are, however, fears in Georgia that the Armenians of Javakheti in particular might be aroused by Russian undercover operatives. In the Caucasus, so laden with ethnic suspicions, all it would take to set a problematic province alight would be a well-scripted provocation, supplemented by rumour and innuendo, giving the Kremlin an opportunity to take the dismemberment of the Georgian state one step further. Incidentally, about two weeks before Saakashvili ordered the assault on Tskhinvali, the leaders of an Armenian nationalist group in the region were arrested in mysterious circumstances. Whether or not there was a connection between these two events remains to be seen.

On to Azerbaijan - of course, one obvious way in which the Kremlin could destabilise that country would be through a thawing of the frozen conflict over Nagorno Karabakh with Armenia. That would, however, require the latter’s co-operation, and would, moreover, be fraught with potentially dangerous and unforeseeable consequences for all parties. In its earlier ‘hot’ phase, the Karabakh conflict was the bloodiest in the former Soviet Union, causing over 30,000 deaths and over a million refugees on both sides. Although nothing can be ruled out considering the events of recent weeks, it is difficult to see how Moscow could be interested in a conflagration that may easily spiral out of its control.

However, other ethnic minorities offer alternative, and more controllable ways of creating headaches for Baku. Two, in particular, might be relevant – the Talysh, living in the South-East, and the Lezghin, in the North-East. While the Talysh live far from Russia’s borders with Azerbaijan, the Lezghin would be a particularly attractive target for provocation - because they have ethnic kin living in the Russian Northern Caucasian autonomous republic of Daghestan, just like the Ossetians in Georgia. Coincidentally or not, in July this year, a shadowy organisation claiming to represent the Lezghin in Azerbaijan called on outside intervention to end a ‘genocide’ by the authorities in Baku against that minority. Could this have been a warning shot from Moscow, coming, as it was, on the heels of a government-sponsored conference on Lezghin issues in the Russian capital? In any case, it fits nicely into Russia’s claim, forcefully voiced and applied during the current crisis in Georgia, to be the protector of the ‘small peoples’ of the Caucasus. Azeri (and Western) policymakers better take note.

Finally, the Ukraine – far larger than the other two states I have dealt with above, but also, extremely vulnerable, in three distinct ways. Most Western analysts centre on the Crimea as a potential future flashpoint, and, considering its mostly ethnic Russian population, its strategic importance as the host of Russia’s Black Sea fleet, and the fact that it was gifted to the Ukraine by the Russian SSR only in 1954, it seems reasonable to assume Moscow might target it for annexation. In recent months, there have already been irredentist noises in the Kremlin regarding the territory, and there are reports Russia has been – rather ominously - distributing passports as in Abkhazia and South Ossetia. The local population is quite decisively opposed to Kiev’s NATO ambitions, and it would not take much effort on Moscow’s part to engineer some kind of separatist reaction, if circumstances demanded.

On the other hand, Moscow might concentrate on exacerbating the East/West divide that has plagued the Ukraine since independence. Contrary to what has been seen in Georgia, there is no large majority in the Ukraine in favour of a pro-Western orientation. In fact, the country is split almost down the middle, with support for NATO increasing as one moves towards its Ukrainian-speaking Western part. In the East, people (both ethnic Ukrainians and Russians) speak Russian, and strongly identify with Russia as a natural, Slavic ally. The fact that opposition to NATO is geographically and linguistically distinct throughout the Ukraine – not just in the Crimea – could offer Russia yet another lever in its fight to keep the country, or a significant part of it, inside its sphere of influence.

Admittedly, this would potentially be a very costly and unpredictable path to take. However, this East/West divide is also visible throughout Ukrainian state structures – bringing us to the third way in which Moscow might try to keep the Ukraine pliant. Rather than taking the Georgian route and using separatism (in the East or in the Crimea), the Kremlin might try to engineer the downfall of the Ukraine’s currently pro-Western central government. In the absence of a national anti-Russian/pro-NATO consensus, it would not be too difficult to tip the balance of opinion in Moscow’s favour through any number of tricks – economic blackmail, propaganda, the funding of pro-Russian groups, bribing/cooptation of pro-Western lawmakers, etc... Once re-established, a pro-Russian Ukrainian government could then quickly re-align the country with Moscow, renewing the all-important treaty on the Russian naval bases in Sebastopol, ditching Kiev’s ambitions to join NATO, and repressing the pro-Western regions of the Ukraine with Russia’s approval. Considering the enormous problems associated with engineering and controlling separatism in a country as large as the Ukraine, this latter option may very well be the one the Kremlin decides to employ.
Posted by Kevork Oskanian at 5:03:00 PM No comments: 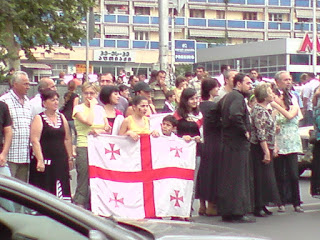 Today, Tbilisi ground to a halt as ordinary Georgians were given an opportunity to express their dismay at Russia's neo-imperial activities in their country. And I must say it was a dignified, and quite impressive performance, with young and old, of all ethnic groups, lining the roads in Tbilisi, Georgian flags in hand, marching and chanting in their millions, and fulfilling their civic duty by expressing loyalty to their endangered state. It was, quite clearly, an unforced, sincere outpouring of public emotion by people who are seeing their state torn to shreds as we speak. 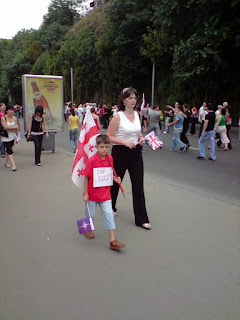 For all its faults in relation to its foreign and security policies, one thing must be made clear: in stark contrast to Azerbaijan, Georgia had made considerable progress in recent years, both in terms of democracy and in terms of its treatment of minorities. While problems do remain, the Saakashvili government has made an honest effort at promoting a civic, inclusive form of nationalism, in preparation of the hoped-for reunification of the country. There is certainly reason to believe the Georgian government's accusations that Russia was prodding Abkhazia, and especially South Ossetia, to obstruct its wide-ranging offers of autonomy to both regions. The idea that Russia was ever a peace-keeper in the Caucasus is one that would make any unbiased observer laugh - over 15 years, it did everything in its power to obfuscate and obstruct. By skilfully playing into and amplifying the fears of both Ossetians and Abkhazians through semi-criminal local regimes, it basically eliminated any chances of these two entities ever reuniting with Georgia proper. 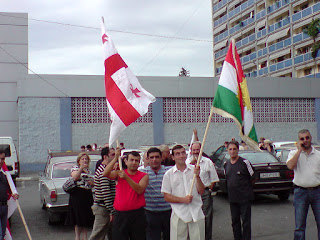 Similarly, Russian claims of 'Genocide' have the smell (stench?) of old-style KGB propaganda all over them. While firing on Tskhinvali with Katyushas was certainly unacceptable on Georgia's part, Russia's claims of 2,000 deaths and tens of thousands of refugees (all within the spate of 12 hours) were suspiciously over-the-top from the start. The crude, 24/7 attempt by Russia's media to create the impression of a major humanitarian catastrophe even managed to fool a few western commentators. Not surprisingly, however, once Russia's mission was accomplished, the same people who had reduced Grozny to pulp several times over without shedding so much as a tear quietly decreased the death count to a still elevated, but hardly genocidal 133. These hysterical claims of ethnic cleansing were all the more unbelievable because Georgia's policies of recent years have clearly been aimed at including both Ossetians and Abkhazians in the fabric of the Georgian state - tens of thousands of Ossetians live in Georgia proper up to this day, and remain largely undisturbed. Wouldn't Georgia have ethnically cleansed those Ossetians under its control before attempting a blitz-genocide in South Ossetia?
Posted by Kevork Oskanian at 2:32:00 PM 2 comments: